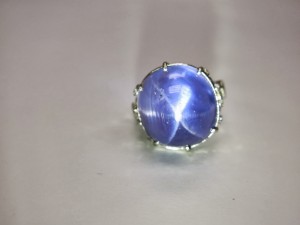 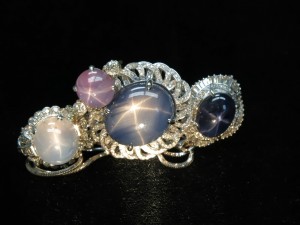 Sapphires will usually show a six rayed star, some gems (garnets and spinel, diopside) might show a four rayed star, while others may show as many as twelve rays.

The star in a sapphire is caused by light reflecting from the surface of parallel needle-like inclusions of a mineral called rutile, formed in relation to the hexagonally related growth structure of the sapphire.
The rays of the star are perpendicular to the direction of the inclusions (think of light reflecting from combed hair pulled into a pony tail, or reflecting from a spool of thread: The line of reflection is in the opposite direction to the direction the hair or threads are going). The star will only show on a domed surface such as these cabochon cut gems, or beads or spheres, and not on a flat faceted surface. 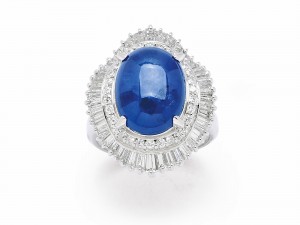 What makes a star gem desirable is a combination of the features that make any gem desirable: Colour, clarity, carat weight, and cut, plus it has the added bonus of the phenomenon of a star. The best star will be well-centred, very distinct, have all of the “legs” of equal strength, and as straight as possible.
In auction catalogues, star gems are often shown without the star in evidence. This is because the sharp, single source, un-diffused light required to show the star will usually detract from the photograph in most other ways, and the colour of the gem doesn’t show as well as it can.

Sometimes a star sapphire may also have the added bonus of having a colour change, such as lot 244 in the November Dupuis sale. This sapphire has a six rayed star, plus it has a colour that is purple in candlelight or incandescent light, and blue in daylight or fluorescent light (this gem was mentioned in an earlier post too).

Duncan Parker, FGA, FCGmA, CAP (CJA), Vice President. Duncan is a columnist and contributor for industry magazines and journals. He has been an instructor of the gemstone course at Ryerson University, the Gemmology courses of George Brown College and Canadian Gemmological Association as well as instructor Master Valuer Program with the Canadian Jewellers Association. A renowned expert, he speaks regularly at international gem and jewellery conferences and symposiums, as well as at less formal events. He has served as President of the Canadian Gemmological Association since 1995. Before joining Dupuis Auctioneers, Duncan was a director of research at Harold Weinstein Ltd., a leading and respected jewellery appraisal company.
View all posts by Duncan Parker →
This entry was posted in Gemmology, Jewellery and tagged Sapphire, star sapphire. Bookmark the permalink.