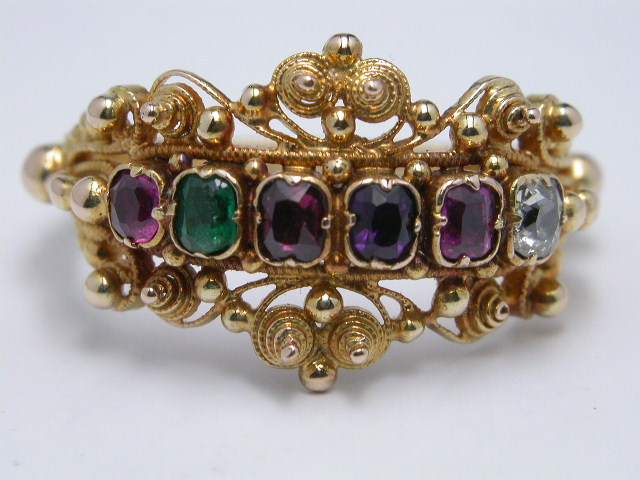 Through history, we have seen jewels tell stories. There are some commonly seen examples of jewels telling a story. Once in a while, jewels carry a secret message, and sometimes the story is not so secret.

The Victorians had the tendency to like secret messages in their art and crafts. The “REGARD” ring was a jewel that told a story that was not really secret, because these rings were common enough that surely most people would have recognized them. The name comes from the word made up from the initials of the gems in a row across the front. Ruby, Emerald, Garnet, Amethyst, Ruby, Diamond. Other words were possible, but “regard” was most popular. A person, overcome with a strong “regard” for another, would present them with such a ring to convey their feelings. (The possibilities for rude messages are huge, we should be glad they aren’t common jewels these days). 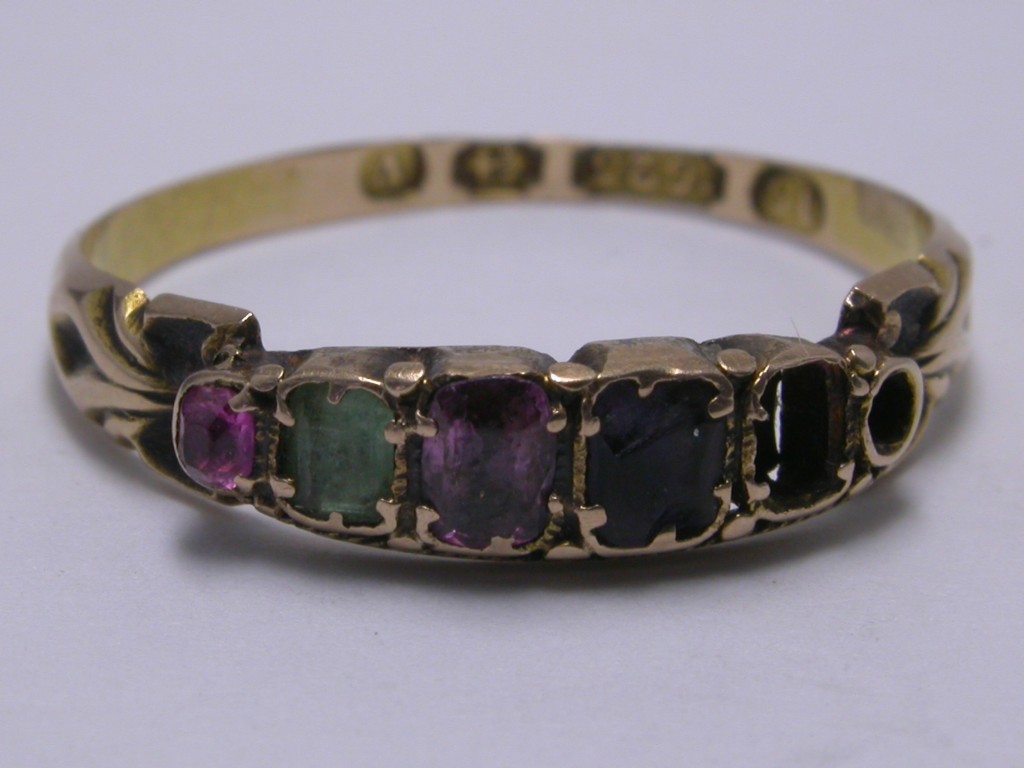 A Victorian REGARD ring missing a ruby and diamond

The Victorians were also very aware of mythology, and mythological themes were often shown in carved cameos. The story told in a cameo jewel may be from classical myths. Here, there is a cameo that represents Night, a shrouded figure, looking downwards, and with a moon above her head, and Day, with clouds around her, looking with upturned face, and rays of light radiating around her head. 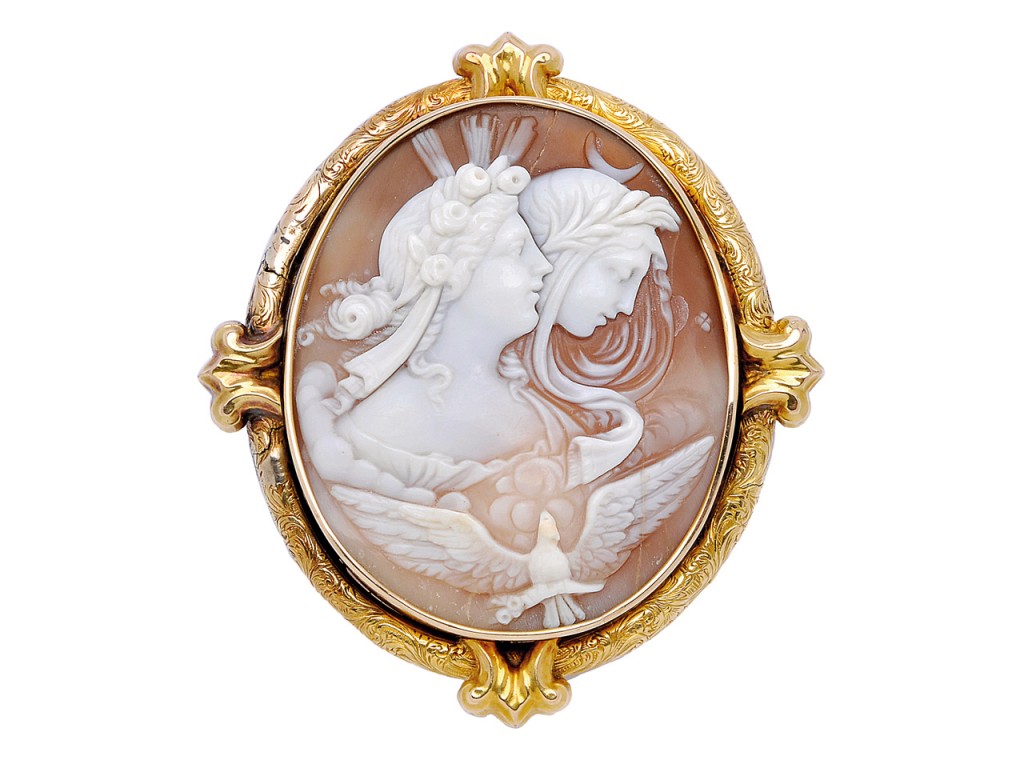 A Victorian cameo showing the allegory of Night and Day 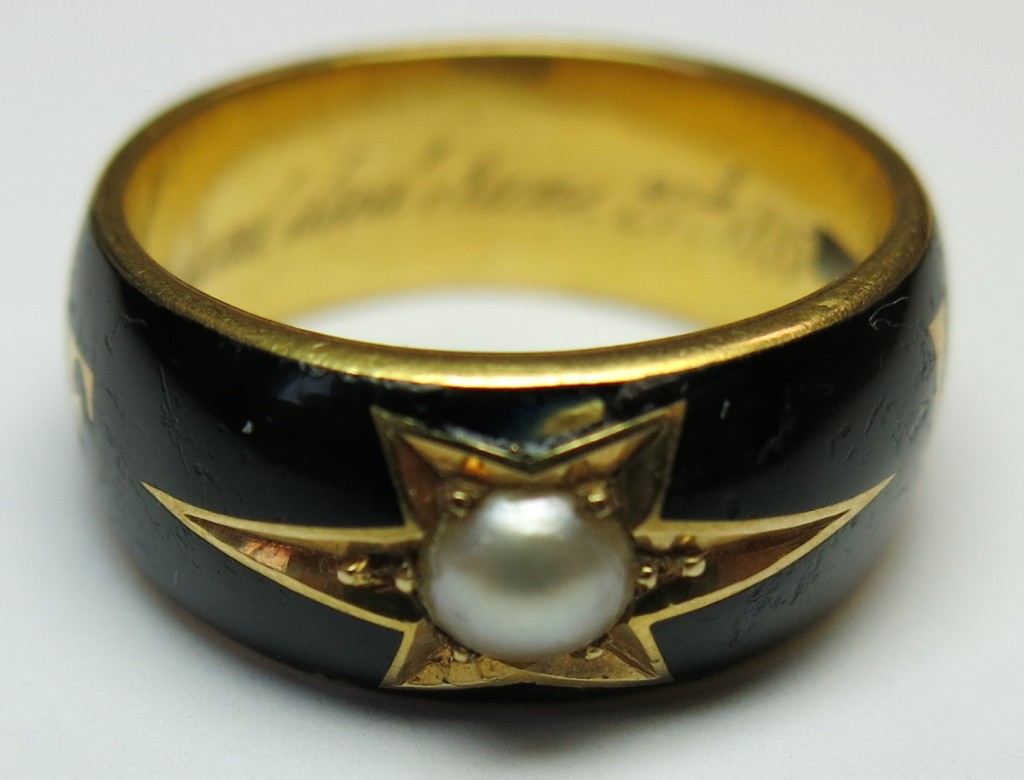 Victorian mourning ring, remembering the loss of a husband at the age of 47, in 1885 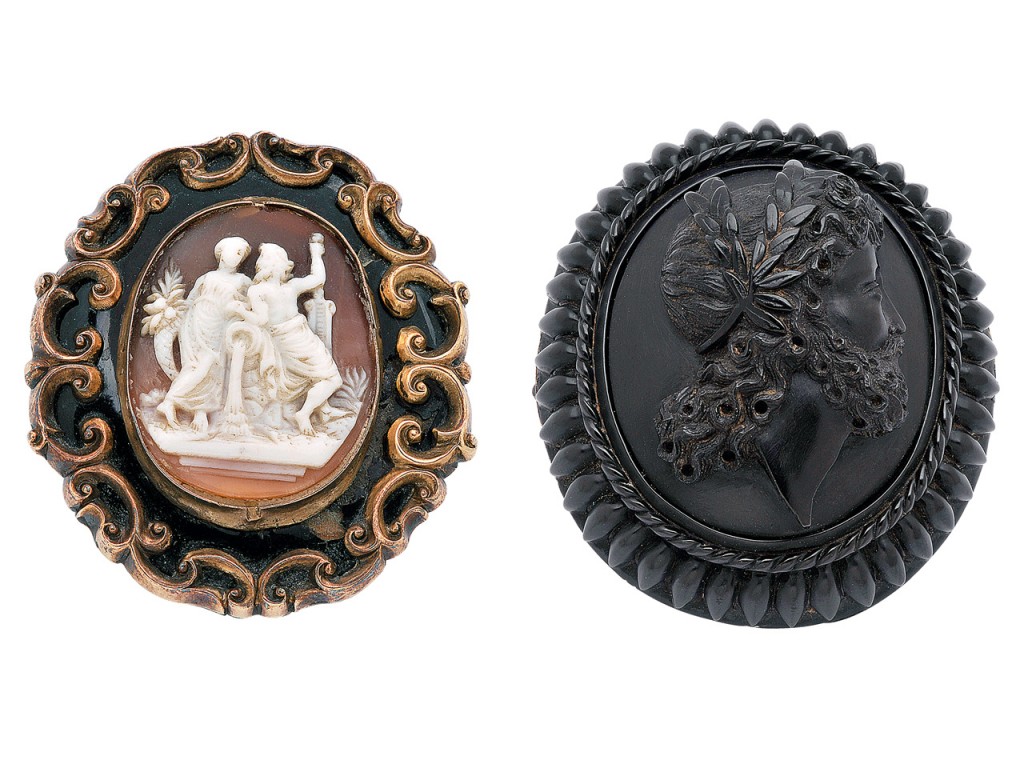 Victorian mourning jewels: Black enamelled brooch set with a camel of Rebecca at the well, and a carved jet cameo from the estate of Mrs Robertson Davies, sold at auction at Dupuis 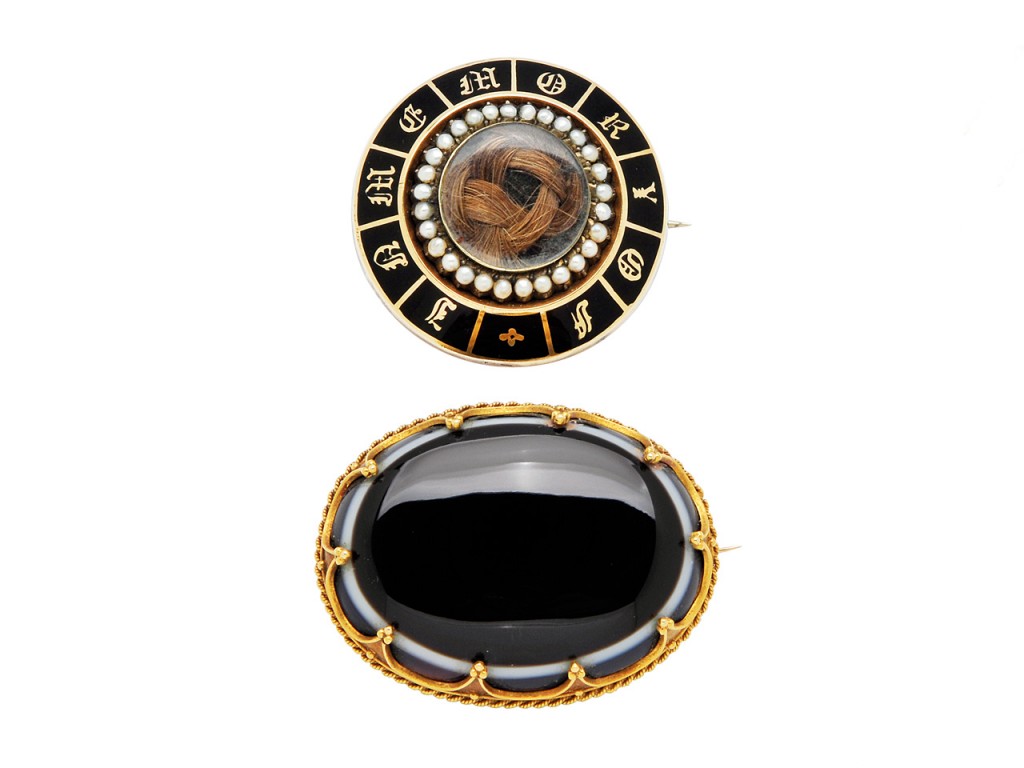 Victorian mourning jewels, one with hair and one set with black banded agate

These days, a “family ring” tells a story. The story told by a family ring is that of the offspring of the wearer, most commonly mothers. When you see a ring with a row of apparently unrelated gemstones that don’t spell a message, it is likely a family ring.

A family ring is usually set with a group of similar sized birthstones, one for each of the children of the wearer. These jewel tells the story of the family of the mother. 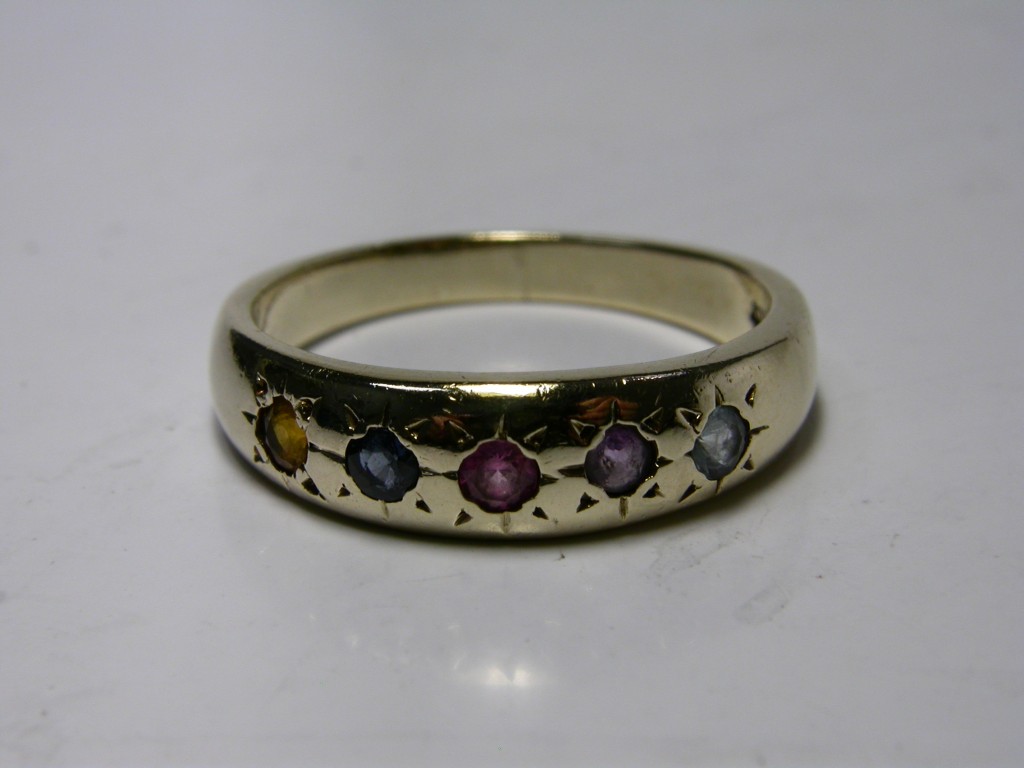 Other jewels tell stories of a personal or group achievement or a victory. One of the most notable type of jewels that tell a story is a championship ring. These are very rare, and unlike a REGARD ring, which is meant to be a secret message, a championship ring is an obvious public statement.

Issued to members of a victorious team, a championship ring only goes on to a very few fingers. One of the rarest is depicted here, a Toronto Maple Leafs Stanley Cup ring. Last seen in 1967: 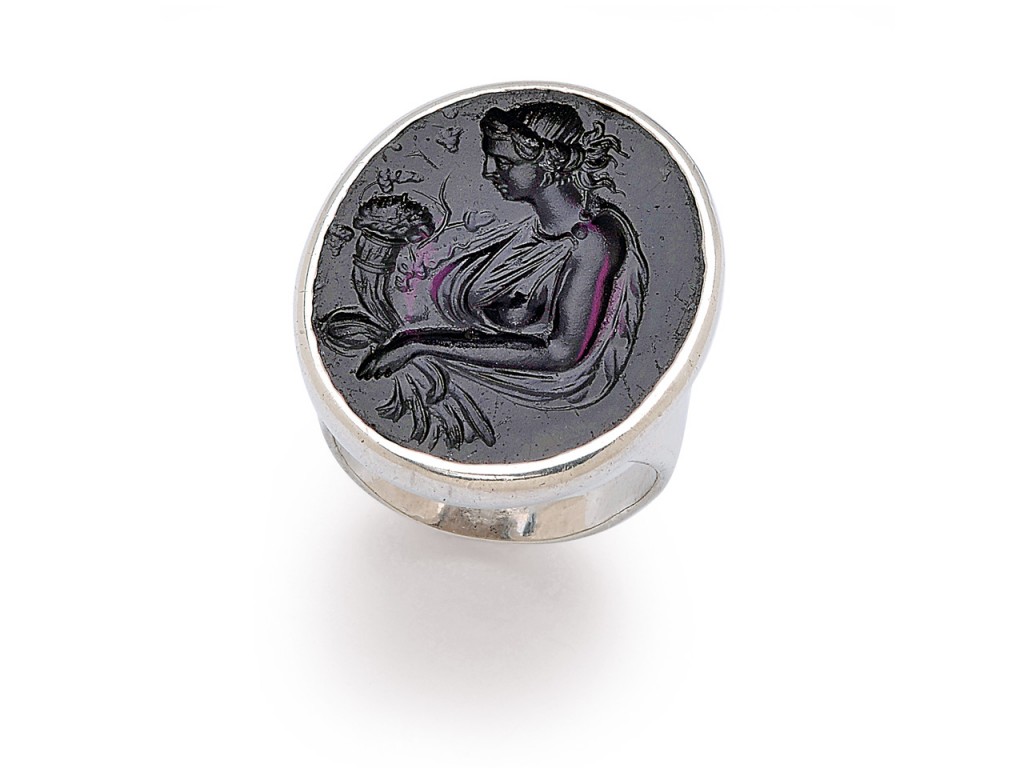 The engagement ring, given by Robertson Davies to Brenda, backstage at the Old Vic theatre in London, 1940

Sometimes a jewel tells stories in two ways. A famous owner can add another level of story. An engagement ring tells the story of love, but the engagement ring of a well known person tells another story at the same time. The engagement ring that famed Canadian author, journalist, publisher, and academic, Robertson Davies, gave to his true love Brenda, was sold at Dupuis Auctions, and is silver with a purple glass intaglio. It was very popular at auction because of the combined stories of the engagement and the famous owner, and sold for $1,500.00.

All jewels tell a story, but some tell more than others. Some of the stories are secrets that we may never know, and others are very public, but all are important.

Duncan Parker, FGA, FCGmA, CAP (CJA), Vice President. Duncan is a columnist and contributor for industry magazines and journals. He has been an instructor of the gemstone course at Ryerson University, the Gemmology courses of George Brown College and Canadian Gemmological Association as well as instructor Master Valuer Program with the Canadian Jewellers Association. A renowned expert, he speaks regularly at international gem and jewellery conferences and symposiums, as well as at less formal events. He has served as President of the Canadian Gemmological Association since 1995. Before joining Dupuis Auctioneers, Duncan was a director of research at Harold Weinstein Ltd., a leading and respected jewellery appraisal company.
View all posts by Duncan Parker →
This entry was posted in Antique Jewellery, Auctions, Jewellery, Uncategorized and tagged jewels, mythology, stories, symbols, Victorian. Bookmark the permalink.